First, make sure you have TensorFlow installed on your computer and import it as follows.

Our ultimate goal as stated earlier is to derive the best fit line that best describes the given data set. A line, as we all know follows the standard equation, y = mx + c. In this equation, we have two variables that are of concern to us, m and c. In our training data y and x would be given to us so we don’t have to care about them for now. So let’s go ahead and declare m and c as a variable.

y and x are what we call placeholders. placeholders as the name suggests, allows us to insert a placeholder for a Tensor that will be fed with a dictionary which contains the training data. Now, let us declare the linear model which is essentially the standard equation of the best fit line.

Here we tf.multiply, m and x and tf.add them to c. This is exactly the same as y = mx + c. Now we need to write a loss function. A loss function or a cost function tells us how far apart the current model is from the provided data. We will be using a standard loss model for linear regression, which essentially sums the squares of the deltas between the current model and the provided data.

linear_model - y creates a vector where each element is the corresponding example’s error delta. We use tf.square to square the deltas and use tf.reduce_sum to create a single scalar that abstracts the error of all examples. We originally declared our m and c variables to have an initial value of 0.3 and -0.3 respectively and this value is not going to produce the best fit line for every data set that is going to be thrown at our linear regression model, so we need to adjust the m and c values to get a best fit line that will adapt and describe any data set that is going to be thrown at us. To do that we use an optimizer. The optimizer we are going to use is called a gradient descent optimizer. It essentially modifies each variable according to the magnitude of the derivative of loss with respect to that variable. There are other optimizers such as the AdamOptimizer that you can use. Different optimizers will give you different loss values at the end of the training session and the process of selecting the most suitable optimizer for your model is more of a trial and error process. Now let’s implement the optimizer.

We pass the learning rate, 0.01 into the tf.train.GradientDescentOptimizer class. Then we minimize our loss using optimizer.minimize. Now we need to provide our training data.

The training data that we have here is really, really small and in the real world this is not going to be the case. Now we need to initialize our global variables the TensorFlow way.

Now lets run the session and train it.

sess.run runs one “step” of TensorFlow computation, by running the necessary graph fragment to execute every operation and evaluate every Tensor in fetches, substituting the values in feed_dict for the corresponding input values. fetches are the first argument of sess.run and the dictionary corresponding the feed_dict argument is our training data, {x: x_train, y: y_train}. Finally, to evaluate the training accuracy,

Since m and c are placeholder variables, they would have been optimized to give us a best fit line that best describes our data at the end of the training session, so we can get the final values of m, c and the loss using sess.run since they are Tensors. And that’s it, this is our linear regression model. Running the model should give you something close to the following result.

Using TensorBoard we get the following graph of our model. 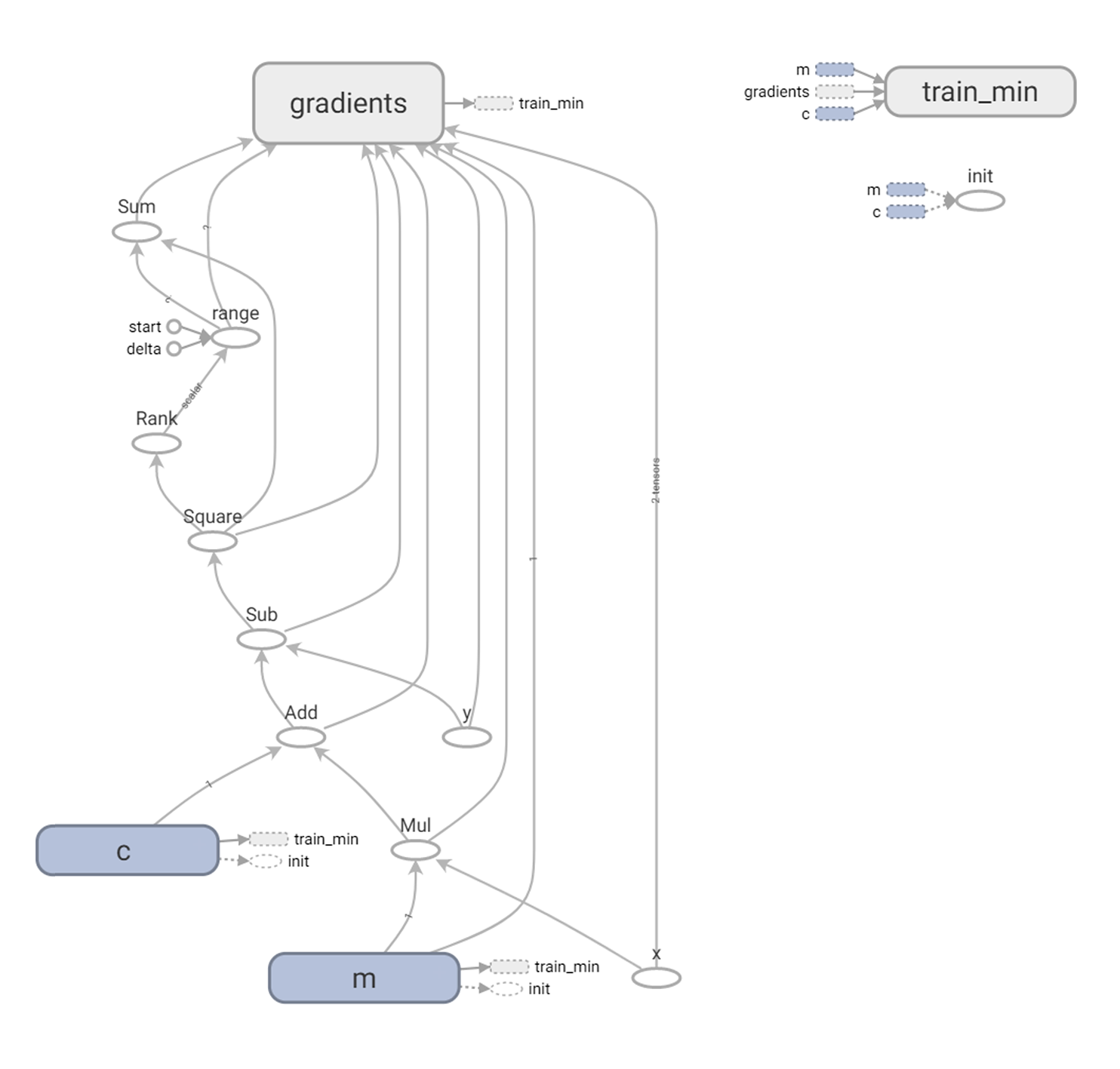